a message from Cheryl Richardson
Monday, 9 September, 2013
118 views, no comments - login or register to comment

Last week I made a mistake that had me mentally kicking myself pretty much every day. When my landscapers came to prune several trees in our yard, I also had them cut back a line of wild bushes and vines along the perimeter of our back lawn to allow the sunlight in to nourish the edge of the grass. It's a common practice to prevent overgrowth and to keep the lawn line in tact. While it's a smart thing to do, it wasn't until it was cut back that I realized my mistake. Here's what it looked like before: 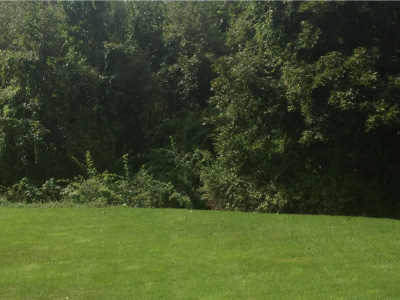 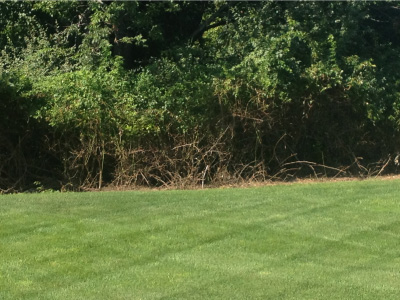 Cutting back the overgrowth had not only left an ugly border for us to look at over the next couple of months, it destroyed a protective covering for the animals that live there. As I looked at the brown, gaping holes, I felt sick to my stomach.  Had I disrupted a safe haven for the rabbits and groundhogs that come to visit every morning and late afternoon? Would there be sufficient protection for them from the coyotes I've watched walk through the yard in the middle of the day?

It wasn't until it was done that I realized I should have waited until later in the year. That way the bushes would have naturally begun to die back in preparation for winter.

For the next several days, every time I looked out the window at the barren edge of the yard, I felt bad. By the end of yesterday, though, I noticed a pattern. I couldn't stop feeling bad about it and as much as the view out my window had become a source of suffering, I kept looking there anyway. That's when I remembered something I heard while working on  You Can Create an Extraordinary Life with Louise Hay. At one point she said... The guilty seek punishment

I made a mistake. I felt bad about it. But my guilt was overblown. I hadn’t considered the results before asking them to cut the brush and it was a simple error in judgment. The problem is sometimes it’s easy to get mired in guilt. And when you do, it’s usually followed by punishment.  Before you know it, you end up unconsciously doing things that make you feel bad about yourself like overeating, drinking too much, procrastinating and missing deadlines, or in my case, repeatedly looking out the window at the mess.

Once I realized what I was doing, I called forth a firm and loving inner parent to put an end to the story called, “How Cheryl destroyed life for the wild animals in her neighborhood.” First, I’m not that powerful. Animals have survived on the planet using amazing adaptive skills long before I got here. Second, it’s done already. Since I can’t glue branches back on the bushes, I might as well stop obsessing about it. And third, no amount of mental ass-kicking ever does any good.

Feeling better comes from compassion not criticism. I’m sure you have your own version of mentally kicking the crap out of yourself when you screw up.  So, you hit “reply all” and sent an email to a group of people who didn’t need to read your negative comments; or you disappointed your kid by not showing up for an important event; or you extended an olive branch for the umpteenth time to someone who trampled all over it (once again) because she’s far more interested in getting her needs met than repairing your relationship. So? 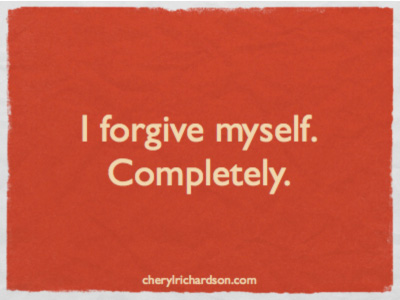 As of this moment, I've dropped the stick I've been using to beat myself up all week. It's silly and I'm bored with it. Just in case you're wielding one as well, I invite you to drop it, too!

Ready to give yourself a break? Whether you've done something you feel bad about or want a reminder for future mishaps, copy the message above and use it. We all need a reminder to be more loving and forgiving toward ourselves.

Children may just come into this life understanding more than we realize. See what I mean when you watch this 9 year-old boy talk about life in the Universe, here. Thanks, Jacalyn!

Cheryl Richardson is the author of The New York Times bestselling books, Take Time for Your Life, Life Makeovers, Stand Up for Your Life, The Unmistakable Touch of Grace and her new book The Art of Extreme Self Care. She was the first president of the International Coach Federation and holds one of their first Master Certified Coach credentials.