If You Made a New Year's Resolution to Lose Weight, You Better Read This First

a message from Cheryl Richardson
Monday, 20 January, 2014
97 views, no comments - login or register to comment

It's a snowy day here in New England and I'm sitting in my livingroom watching Poupon run from window to window trying to catch the big, fluffy snowflakes falling outside just beyond his reach. He's determined to keep at it despite the fact that he never gets the prize. Poor dear...

Makes me think of trying to lose weight in the New Year. We get fed up with being fat, make a resolution, start a new diet and lose some weight, only to gain it all back later on.

I've done that dance. At the beginning of 2006 I lost twenty-five pounds after training with my husband Michael for four months. I felt like a million bucks. Then I gained it all back and felt defeated. I was miserable living in my body.

When I turned fifty I became acutely aware of the limited time I had left on the planet. I thought about it a lot. Not in a dark, morose kind of way.  Instead, I used the ticking clock of mortality as positive pressure to inspire me to think carefully about the choices I made as I moved forward with my life.

I thought about making a bucket list. Did I want to take a bike trip through the Tuscan countryside or see the Taj Mahal? Maybe publish a novel instead of self-help? As I considered the idea, there was one dream that haunted me - I wanted to live peacefully in my body.

It's not easy being a woman. Our bodies are scrutinized, objectified, measured, and judged. And, at that time in my life, the most relentless judge of all was the one living in my head.

If you've ever lost and regained weight you know how horrible it feels. You long for the strength and peace you felt in your body when the weight was gone, the joy of wearing fun clothes, and the freedom of no longer sharing your life with a nasty inner critic. So I created a bucket list with only one item: To live peacefully in my body before I die.

It was right around this time that I read Geneen Roth's book, Women, Food and God and realized that I wasn't hungry for thinness, I was hungry for aliveness and I was using food to manage that desire. That's when I decided to never diet again. Ever.

Geneen's book also helped me make the connection between eating and feeling and it inspired me to begin a practice of inquiry. I wanted to understand what was really going on every time I put food in my mouth. I paid attention to what I felt each time I had something to eat. And while it feels vulnerable to admit this, here's some of what I discovered:

I ate because I felt lonely.

I ate because I felt embarrassed about feeling lonely.

I ate because I felt bored.

I ate because I didn't feel met by the person sitting across from me during dinner.

I ate when I was pissed. I piled food on top of an ever-increasing mountain of rage, rage that not only belonged to me, but the women who came before me.

I ate because I longed for comfort, pleasure, and sweetness.

I ate because I subconsciously knew it added weight to my body and more weight meant more safety.

I ate to level the playing field.

I ate when I felt sad and couldn't lift myself above the clouds.

I ate because I'd worked hard, dammit, and I felt entitled to a reward.

I ate to keep resentment at bay, resentment born from exploiting myself for far too long.

I ate because it was the quickest way to feel good without needing to ask anyone for anything and risk being disappointed or rejected.

I ate because I felt so guilty about gaining all that weight back.

That was a big one. The guilty seek punishment. And I punished myself every day with food. And we wonder why diets don't work. 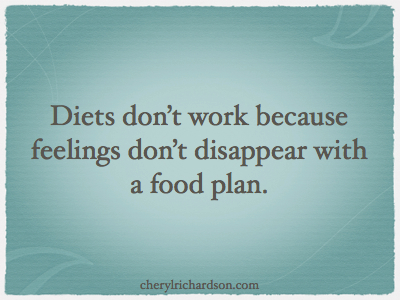 Little by little, I'm happy to say that the practice of inquiry has taught me so much about myself. In order to live peacefully in my body, I didn't need a weight loss program, I needed to tend to my feelings - welcome them, honor them, and allow them to teach me about my needs. That's when the real work began.

It's been over a year and while I've lost fifteen pounds so far, the real reward has been in learning to trust myself, to take better care of my needs, and to use my feelings as a guide to making smart choices. And I'm no longer living with the nasty judge in my head.

So if you happened to set a New Year's resolution that included losing weight, please remember to start on the inside. It's rarely about what you're eating, and more likely about the feelings trying to get your attention. Listen.

This week's video is an inspiring ten-minute TED talk about growing food. Check out this video here. Thanks, Reid!

Cheryl Richardson is the author of The New York Times bestselling books, Take Time for Your Life, Life Makeovers, Stand Up for Your Life, The Unmistakable Touch of Grace and her new book The Art of Extreme Self Care. She was the first president of the International Coach Federation and holds one of their first Master Certified Coach credentials.